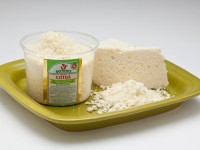 USES: This non-melting cheese varieties are typically sprinkled over beans and corn-masa snacks (antojitos such as tacos and enchiladas), as we would sprinkle Parmesan on pasta.