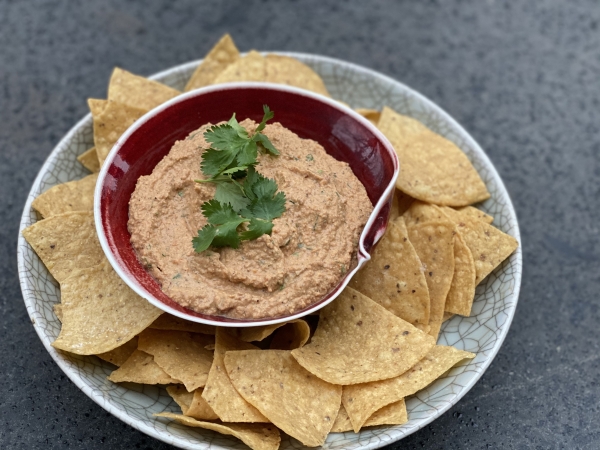 Though this dip has no chickpeas in it, the consistency reminds me of hummus. On occasion, I have even added a little tahini to the blender, though it’s not at all traditional in Yucatan, where the Mayan-named sikil pak is a preparation that’s been passed down for generations. In the peninsula’s markets, you buy the seeds already ground from tiny, native, white pumpkin seeds with shells so soft they’re left on. Those seeds give the sikil pak a distinctively coarser texture—and a little less richness—than this version. Some cooks make the sikil pak mixture half tomatoes. I like a greater emphasis on the richness of the seeds. Sikil pak is pretty easy to fall in love with. At Frontera, one of our most popular starters is the half-and-half: half guacamole, half sikil pak plus plenty of just-made chips.
Servings: 2generous cups, chip dip for 6 to 8
Print

In a large (10-inch) nonstick skillet set over medium heat, dry-roast the onion slices, turning them from time to time, until they are charred in spots and translucent, 4 or 5 minutes.  (If you don’t have a nonstick pan, lay a piece of foil in your skillet to make clean up much easier.) Roughly chop the onion and scoop it into a food processor or blender jar and add the tomatoes, juices, hot sauce (or habanero) and pumpkin seeds.  Blend until nearly smooth—this may take several minutes and will likely require you to stop the machine and scrape down the sides several times.  The mixture should be a thick, dip-like consistency; if yours is thicker, blend in some water.  Season with salt, usually a scant teaspoon, depending on the saltiness of your pumpkin seeds.  Add the salt along with the cilantro to the food processor, pulsing several times to evenly distribute everything.  Scrape the sikil pak into a serving dish and serve with chips or vegetables slices, or use it as a spread on a sandwich.