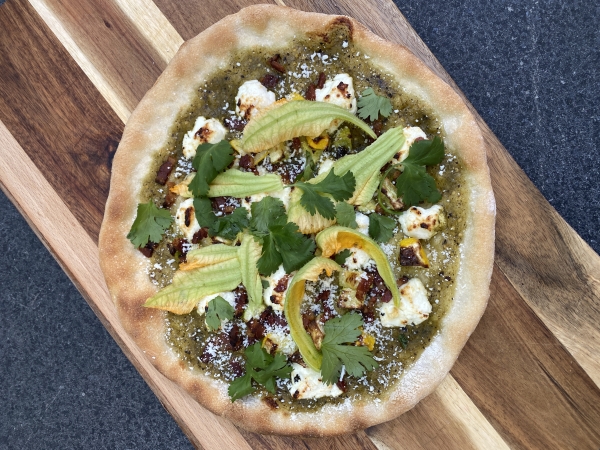 I’ve done this recipe for years, weaving together the flavors of roasted tomatillos with goat cheese and bacon. The combination just sounded right for me, and it has stood the test of time. My approach started as a grilled pizza, then became a baked one with a thin, crispy crust—the one I’m offering here. (If you like a thicker crust, divide the dough into 4 or 5 pieces, but still roll or stretch them into 12-inch circles.) Giving the dough a refrigerated slow rise overnight gives the richest flavor. But when I’m not that organized, I simply make the dough early in the morning of the day I’m serving, cover it with plastic wrap and let it stand at cool room temperature for 5 or 6 hours. Two hours before baking the pizzas, I divide the dough and shape the balls, leaving them at room temperature for a second rise. At the height of summer, I love to scatter on some diced roasted summer squash before baking the pizza, then strew the top of the finished pizza with squash blossoms (pulled into ½-inch ribbons).
Servings: 612-inch pizzas
Print

Make the dough and let rise overnight.  For best flavor, start the dough the night before.

Whether you’ve made the dough by machine or by hand, cover it with plastic wrap and refrigerate until the next day.

The second rise.  about 2 hours before baking the pizzas, scoop the dough onto a lightly floured work surface and divide into 6 equal pieces (each will be about 170 g, if you’re measuring).  Cupping a lightly floured hand firmly over each piece, roll the dough around, applying medium pressure, until the ball bounces up into a resilient-looking sphere when your hand is released. (In order to get this technique to work, there needs to be a little traction.  Too much flour on work surface or hands won’t offer enough sticky traction.) As balls are made, flour them and set a couple of inches apart on a floured or parchment-lined baking sheet.  Cover lightly with plastic wrap and let rise double in bulk, about 2 hours.

Forming and baking the pizzas.  About 45 minutes before baking the pizzas, turn on the oven to 500 degrees and place a pizza stone or metal pizza slab on the lowest shelf.  One at a time, form and bake the pizzas.  Using a little flour to keep the dough from sticking to pin or hands, roll or stretch a ball of dough into a 12-inch round (there are lots of YouTube demos on the stretching technique). Lightly flour a pizza peel or rimless baking sheet and lay on the dough. Gently shake the peel back and forth to ensure that the dough moves freely. Quickly spread 1/3 cup salsa over the dough, leaving about a ½-inch border all around.  Dot with about 1/3 cup goat cheese, broken into small clumps, and about 3 tablespoons crumbled bacon.  Once again, gently shake the peel to ensure the pizza isn’t sticking, then open the oven door, angle the peel slightly down and gently shake the peel as the pizza slides toward the hot cooking surface.  Once an inch or 2 of the pizza is off the peel, swiftly pull the peel toward you, leaving the pizza behind.  Cook 4 to  6 minutes until the crust is nicely browned.  Slide the peel or cookie sheet under the pizza and remove.  Sprinkle with a couple tablespoons of queso añejo (or one of its stand-ins) and cilantro leaves.  Cut and serve!

How I cook bacon to use as a garnish or flavoring:  Cut the bacon crosswise into slices less than ¼ inch wide.  Heat a large (10-inch) skillet over medium high.  Add the bacon and use a wooden spatula or spoon to move it into an even layer.  After a minute, when the fat has started to render generously, stir regularly until the bacon pieces are richly browned and crisped, about 7 more minutes.  Drain on paper towels.  It takes about 8 to 10 ounces of raw bacon to yield a cup of crispy pieces.