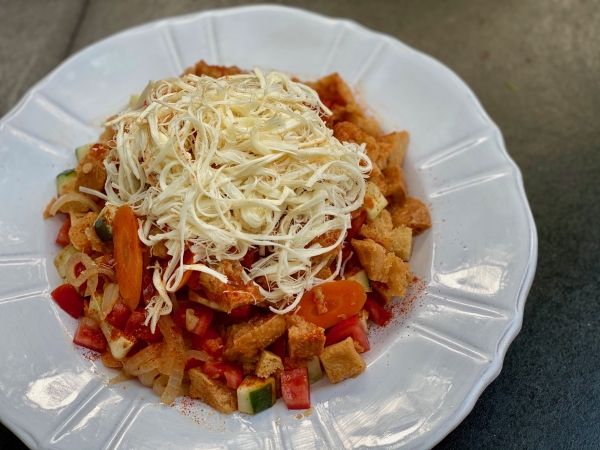 It might prepare you for piedrazo if you think of it as a grown-up version of flaming hot Doritos: a revved up spicy-tangy-salty blow to the taste buds—in a great way, of course. It’s like the crazy bar snack you keep going back to between swigs on a cold beer. A piedrazo in Spanish is a blow with a rock, so the name itself is forewarning. The rock is the chunk of hard bread a street vendor drops in the bag. The vinegar, chile and salt are the blow. I must admit: On many a stroll through Oaxaca, I’ve found myself pulling the bread from the mix, gnawing off the softening parts, then quickly dunking it back in the bag to soak up another round of dramatic flavor, impatient that it was taking so long. Here I suggest you cut some sturdy bread into smaller pieces: rectangles for the bar snack (so they’ll stay crisp longer), cubes for the salad (so they’ll soften quicker, as for panzanella). Potato is a player in the vegetable mixture for some vendors. Cut boiling potatoes into ½-inch cubes (about 1 cup), add them to the simmering vinegar mixture about 3 minutes before you add the onion and carrot. Another version adds a large chile pasilla oaxaqueño (stemmed, seeded, sliced into ¼-inch pieces crosswise) to the vinegar mixture. You’ll likely want less chile salt and Mexican hot sauce with the chile-spiked vinegar.
Servings: 4to 8, depending on its role
Print

Toast the bread and make the pickled vegetables.  Heat the oven to 300 degrees. Spread the bread onto a baking sheet, slide it into the oven and bake until the pieces are crisp through and lightly browned, about 30 minutes.  In a medium (2- to 3-quart) saucepan, combine the vinegar, piloncillo, salt, bay, thyme, garlic and ¾ cup water.  Bring to a simmer, stirring to dissolve the sugar and salt.  Add the sliced carrot, cook a couple of minutes, then stir in the onion, turn off the heat, cover the pan and let cool.

Finish the dish.  Scoop the bread into a large bowl.  Using tongs or a slotted spoon, add the carrot and onion to the bread, then splash on about ½ cup of the vinegar mixture.  (You can strain and reserve the remainder to use in a salad dressing.) To serve as a bar snack, scoop the mixture onto a deep platter, top with the cheese, sprinkle liberally with the chile salt and dollop on the hot sauce.  To serve as a salad, stir in the cucumber, tomato and olive oil. Let stand a few minutes for the bread to absorb some of the liquid, then scoop it onto a platter or divide between plates.  Top with the cheese, and sprinkle with a little of the chile salt and hot sauce.

To make chile salt: Mix together a tablespoon of ground guajillo chile, a tablespoon of salt and as much ground arbol chile as you like (it’s very spicy).  I’d start with ½ teaspoon and increase from there.  Chile salt is a spicy condiment.