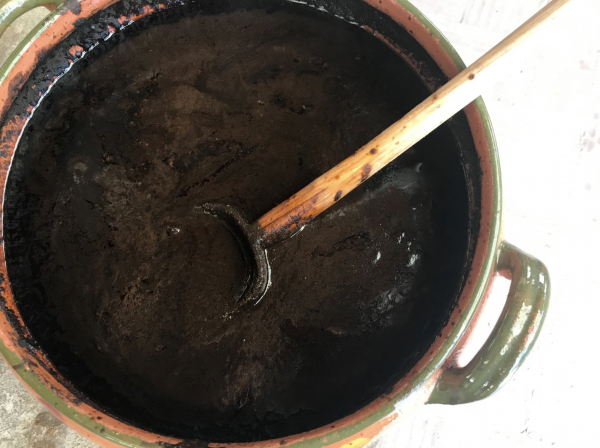 This recipe builds out the basic edifice of a classic mole poblano without going all the way to painting and finishing the rooms. That is to say, all the basic ingredients and steps are here, though most Pueblan cooks would add more spices, more fruits, additional thickeners and flavorings. Plus, they would make a much larger quantity. This recipe is a great one if you’re looking to experience mole making without spending all day cooking for a crowd. Yes, most traditional mole poblano recipes expect the cook to commit a generous amount of time and promise a celebratory crowd to appreciate the endeavor. In the traditional kitchen, whole chicken would first be poached, then the broth used to make the sauce and the cooked pieces warmed in it just before serving. You can follow tradition or you can serve this mole on grilled or roasted chicken or vegetables, with roasted or braised pork loin, with grilled swordfish or, following along another traditional path, as the sauce for enchiladas.
Servings: 2quarts, serving 10 with leftovers
Print

Toast the sesame, almonds and raisins.  Return the unwashed pot to the medium heat and add more oil or lard to coat the bottom of the pan evenly.  Add the almonds and stir for a minute or two, until you see the first signs of browning.  Add the sesame and raisins and stir nearly constantly until the sesame turns golden and the raisins have puffed, about 3 minutes more.  Scrape into a bowl and rinse out the pot.

Blend and cook the chile base.  Blend the chile mixture until as smooth as possible—a minute or so in a high-speed blender like a Vitamix, 2 or 3 minutes in most blenders.  Set the pot over medium to medium-high heat and add enough oil or lard to coat the bottom of the pan generously.  When hot, set a medium-mesh strainer over the pot and press the mixture through it and into the hot fat (with a high speed blender, straining is not really necessary).  Stir nearly constantly until the chile puree darkens noticeably and thickens to the consistency of tomato paste, usually 5 to 7 minutes.  Remove from the heat.

Blend the nut mixture.  Scrape the almond mixture into the unwashed blender jar and add the tomatoes and bread.  If using whole spices, pulverize them in a mortar and add the ground spices to the blender along with 1 ½ cups of the broth.  Blend until as smooth as possible.  (This may take longer than blending the chiles because of the sesame’s hardness.  Rub some between your fingers to test for smoothness.)

Final frying and simmering.  Return the pan with the chile paste to between medium and medium-high heat, and, when steaming-hot, strain in the nut mixture.  (Again, straining is not really necessary with a high-speed blender).  Stir for several minutes until the mixture again looks the consistency of tomato paste.  Stir in the chocolate and the remaining 3 cups broth, partially cover and simmer over medium-low heat, stirring from time to time to ensure nothing is sticking, for an hour or longer (the longer the simmer, the more integrated the flavors).

Finishing.  If the mole has thickened beyond the consistency of, say, potato soup, thin it out with a little more broth or with water.  Taste and season first with salt (usually about 2 teaspoons if you’ve used salted broth) and then with sugar (usually about 2 tablespoons) to bring forward the chile flavor and give the finished sauce a slightly noticeably sweet edge.  Mole, like many stews and braises, will always taste a little better the second day, so don’t hesitate to make it ahead, cool it to room temperature and refrigerate it for up to a week.  It may be frozen for several months.