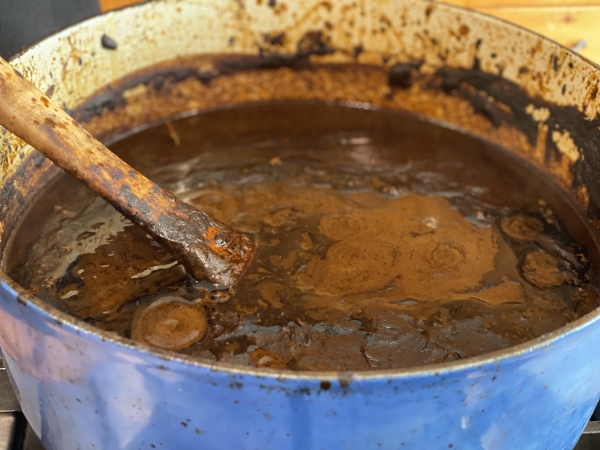 Making black mole is an undertaking, one that folks in Mexico often spread over three days. The first day is for collecting, measuring and doing the preliminary steps of preparation—the cleaning, toasting, roasting and such—or what in the professional kitchen is called mise en place, setting everything in its place so that the cooking will go smoothly. I’ve labeled those steps Basic Preparations below. The cooking often takes place on the second day, followed by serving on the third day. That’s the way we make this version in our restaurants. It’s a compilation of years of Oaxaca exploration and stove-side experience—classic, deeply satisfying and awesome, but not too baroque (some recipes have nearly 40 ingredients). \ It’s common in Oaxaca to poach chicken to serve with this mole, using the poaching liquid in the mole itself. At Topolobampo, our Michelin-starred, Beard Award-winning restaurant, we serve it with wood-grilled ribeye. Though it may strike you as like cultural whiplash, seared foie gras with black mole is a thing of wonder.
Servings: 21/2 to 3 quarts
Print

Though the preparation is detailed and lengthy, it is manageable for anyone who has set his or her eyes on this prize.  Just a few points to pay attention to:

Basic preparations: toast and soak the chiles.  Heat a very large (12-inch), heavy skillet or griddle over medium.  Turn on an exhaust fan and/or open a window or door to minimize the effects of “chile fumes.” In 4 batches, lay the chiles in a single layer on the hot surface and turn them regularly until they have darkened evenly. Don’t be tempted to turn up the heat: you want to deeply toast them, not burn them.  Right away, you’ll notice that the inside of the chiles will turn a lighter color—what I’d call a tobacco brown.  When the chiles have reached the full “black mole” toast, that tobacco brown will have darkened to chocolate brown and the exterior of the chiles will have crispy spots. This is painstaking work—each batch will take 8 to 12 minutes, the thinner-fleshed chiles taking less than the thick-fleshed ones.  But more than anything else in this preparation, the final flavor depends on getting the toast right.  The more you toast chiles for black mole, the more adept you’ll become at judging just the right stage.  Collect all the chiles into a bowl, cover with hot tap water, weight with a plate to keep them submerged, and soak the chiles for 45 minutes.  Drain, reserving the soaking liquid and set aside.

Basic preparations:  burn the seeds. Measure ¼ cup of the chile seeds and discard the rest.  Pour them into your skillet (if you were using a griddle, best to change to a skillet here, so you don’t have to chase them around). Set over medium heat and stir regularly for 4 to 5 minutes until the seeds until are nearly black.  As they approach black, you’ll notice they become shiny as natural oils migrate to the surface.  At that point, shake the seeds to one side of the skillet and hold a lighter, long match or culinary blow torch directly on the surface of the seeds until they catch fire.  (You may have to direct the flame to several spots on the pile to get it all to catch.) When most of the pile is in flames, gently stir the seeds until the flame dies out (it will take several minutes).  Scoop them into a small dish, cover with cold water, swish around for a couple of minutes or so to dislodge the ash. Drain off the water and scoop them into a large bowl.

Basic preparations: dry-toast almonds and sesame seeds.  Wipe out the skillet and return it to medium heat.  Add the almonds and stir regularly until the nuts are richly browned throughout, about 7 minutes and crape into the bowl with the seeds. Add the sesame seeds to the skillet (they will start to pop) and stir them for 3 to 4 minutes, until they, too, are richly browned.  Add them and the roasted peanuts to the seed and almond bowl.

Basic preparations: brown onions, garlic and fruit.  In the skillet, heat 3 tablespoons of the oil or lard over medium to medium-high. Add the onion and garlic and cook, stirring regularly, until richly browned, about 7 to 10 minutes.  Using a slotted spoon, scoop in with the seed and nut mixture, leaving behind as much fat as possible. Add a little more fat to the pan if necessary to coat it generously, then add the plantain and cook, stirring frequently, until it is richly browned, too, 4 to 5 minutes.  Use the slotted spoon to scoop it in with the other browned ingredients, add more fat to the pan if necessary and scoop in the raisins.  Stir regularly until the raisins puff and brown, about a minute, then scoop in with the rest of the mix.

Basic Preparations: spices and herbs.  Measure the spices and herbs (but not the avocado leaves) into a mortar or electric spice mill and pulverize. Scrape into the seed and nut mixture.

Basic Preparations: roast tomato and tomatillos, toast tortilla and bread.  Heat a broiler and position the rack as high as possible.  Spread the tomato and tomatillos onto a rimmed baking sheet and slide under the broiler.  Roast until blistered and blackened on one side, about 6 minutes, then flip them over and roast the other side.  Remove and replace with the tortilla and bread, watching them carefully as they darken, even char a bit.  Darkly toast both sides for about a minute. Scrape the tomato and tomatillos in with the seed and nut mixture, followed by broken pieces of bread and tortilla.  Add 3 cups of the broth.

Blend the chiles.  Scoop half of the chiles into a blender jar.  Taste the soaking liquid:  If it’s really bitter, discard it; if sweet with just a hint of bitter, use it to puree the chiles. Pour just enough chile-soaking liquid or water into the blender to almost cover the chiles.  Blend to as smooth a puree as possible, adding more liquid if necessary to keep the puree moving through the blades.  This will likely take a couple of minutes, even with a high-speed blender.  (Adding so much liquid that the puree becomes soupy will inhibit obtaining a satiny puree and considerably lengthen the cooking process.) Press through a medium-mesh strainer into a bowl; discard the skins in the strainer.  Puree the second batch of chiles in the same way and strain in with first batch. Set aside the blender for the nut mixture—no need to wash.

Blend the seed and nut mixture. Scrape the mixture (including the liquid) into the blender and blend to as smooth a puree as possible. (It should be so smooth that a drop rubbed between your fingers has no detectable grittiness.) Strain through a medium-mesh strainer into a bowl.

Cook the chile puree. Set a very large earthenware cazuela or heavy pot over medium-high heat—an 8- to 12-quart capacity is ideal.  When hot, add ¼ cup of the oil or lard, and when that offers up the first whiff of smoke, add the chile puree all at once.  Cook, stirring almost continually, until shiny and reduced to the almost the thickness of tomato paste, 8 to 12 minutes. A spatter screen or cookie sheet set askew on the pot can help catch spatters.

Cook down the seed and nut mixture. Add the blended mixture and stir almost continually for about 10 minutes, until the mixture is nearly as dark and thick as the chile puree was.

Simmer the mole.  Add the chocolate, avocado leaves and remaining 4 cups of broth (the mole will be quite thin at this point) and simmer, partially covered, over medium-low heat for a couple of hours—the longer the better.  If it thickens past the consistency of a cream soup—for me, the ideal—add more broth (or water) to adjust.

Season the mole.  Even if you’re serving the mole in a day or two, season it now.  Start with 1 tablespoon salt (less if you used salty broth).  Stir it thoroughly into the mole, wait a minute, then taste.  Add more salt, a little at a time, tasting until you feel you’ve reached the saltiness of, say, chili—even though what’s in front of you will taste angular and out of balance.  Now stir in ¼ cup sugar, wait a minute, then taste.  The fruitiness of the chiles should emerge, plus the picante and the bitterness should come into balance.  Continue to add sugar by the tablespoon, until the full flavor of the chiles and fruits emerge and the balance seems perfect. The right amount of sugar will always leave this mole with an aura of sweetness enveloping all that rich complexity and underlying bitterness.  Think: good Italian amaro.  As all the flavors meld over the next 24 hours or so, you’ll likely need to adjust the seasonings.