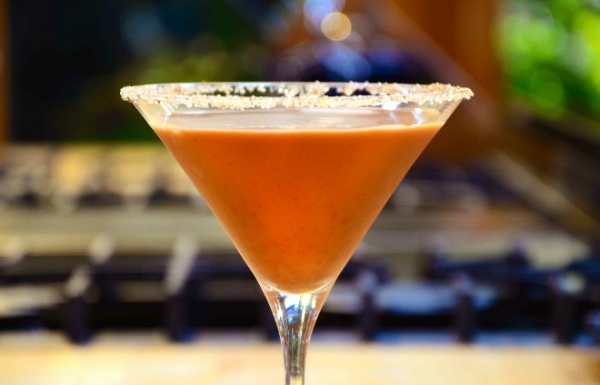 Spread the sugar or cinnamon sugar on a small plate, moisten the rim of a 6-ounce martini glass with a wet paper towel, and upend the glass onto the sugar to crust the rim.

In a cocktail shaker, combine the tequila, crème de cacao, Agave Syrup and chocolate sauce.  Cover and shake 10 seconds to blend in the chocolate sauce.  Uncover, add the ice and shake vigorously until frothy and cold; tiny ice crystals will appear in the drink after about 15 seconds of shaking. Strain into the sugar-crusted glass and serve immediately.

In a medium (3-quart) saucepan, combine the heavy cream and agave syrup or corn syrup over medium heat.  Let come to a simmer, stirring occasionally.  Stir in chocolate and remove from heat.  Stir frequently until all the chocolate has melted.  Stir in cinnamon and vanilla, and cool.