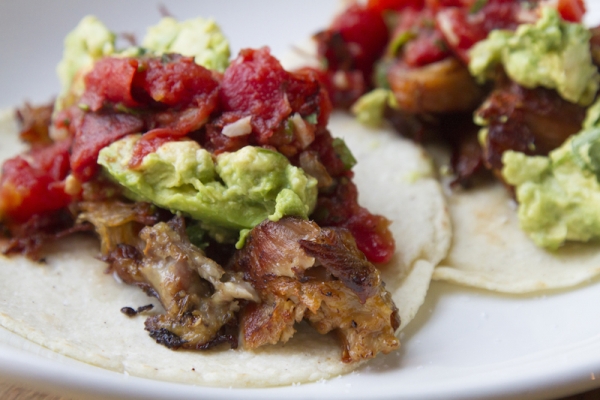 Cut the pork into 2 ½- to 3-inch pieces and sprinkle generously on all sides with salt. Scoop the lard into a 6-quart slow cooker and turn on high.  When the lard is melted, fit in the pork in a single layer (there should be few gaps between the pieces and they should be barely covered with the fat).  Cover and cook until thoroughly tender, about 3 hours.  Turn off, uncover and let cool while you prepare the accompaniments.

Scrape half of the mixture into a bowl with the avocados, mash with the potato masher or back of a spoon until smooth or chunky—whatever your favorite guacamole texture.  Stir half of the cilantro and squeeze in a little fresh lime juice—1 tablespoon is usually enough to brighten the flavors.  Taste and season with salt, usually about a ½ teaspoon.

Scoop the remaining half of the chile-garlic mixture and cilantro into a bowl with the fire-roasted tomatoes and season with a tablespoon or two of fresh lime juice. Taste and season with salt, usually about  ½ teaspoon.

Cut the remaining limes into wedges and scoop into a serving bowl.

Remove the pork to a cutting board, leaving behind as much fat as possible.  (You can refrigerate the lard to use for another round of carnitas, to season beans or fry potatoes or the like.) Shred the carnitas into very large, coarse pieces.  When the pan is very hot, spoon in enough carnitas-cooking fat to film the bottom generously.  Scoop in the pork, spreading it out evenly over the bottom of the pan.  Cook undisturbed for a couple of minutes, until it is richly browned and releases itself from the bottom of the pan.  Gently turn the pieces to brown the other side. Remove to a plate lined with paper towels. Sprinkle with salt (coarse salt is welcome here, if you have it). Serve on a warm platter with the salsa, guacamole, lime wedges and warm tortillas.