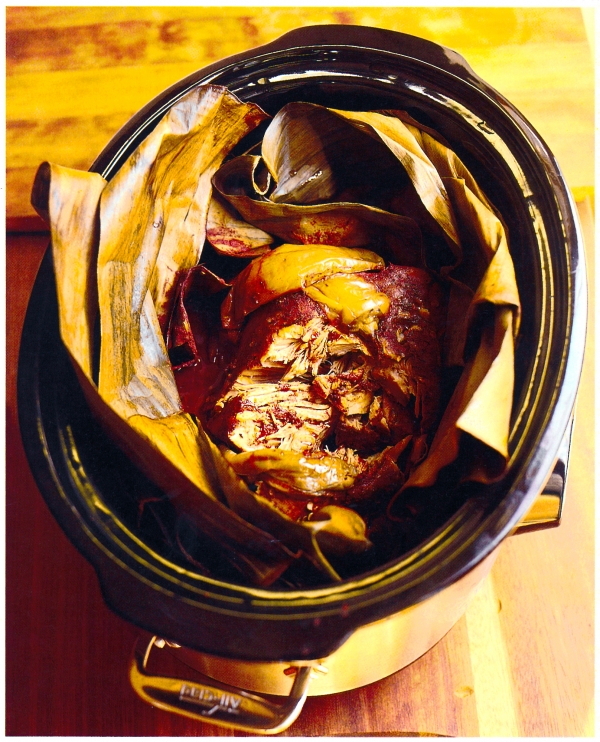 Just say cochinita pibil in the Yucatan (or practically anywhere in Mexico nowadays), and thoughts of celebration come to mind. After all, in all it’s glory, we’re talking a whole pit-cooked pig, smeared generously with the unique savor of rusty-colored achiote seasoning and served with the meaty cooking juices, a drizzle of habanero fireworks and the citrus-sour of pickled red onion. Truth is, you can make a delicious, satisfying, simple version of Mexico’s big-deal cochinita pibil for an everyday dinner. You just have to scale back the normal party-size portions, use prepared achiote seasoning and employ a slow-cooker (or Dutch oven, for oven-braising). Using a bone-in pork shoulder roast offers a rich flavor reminiscent of the whole pig version, and slow-cooking equals delicious satisfaction. Fried black beans, a salad and warm corn tortillas are my favorite accompaniments for this slow-cooked wonder. A final note: hot yellow chiles (like Hungarian wax) are commonly cooked with the meat in Yucatan. If that appeals, split them in half, take out the seeds and lay, cut side down, over the meat.
Servings: 6
Print

Place the half package of achiote seasoning in a small bowl, pour in ½ cup of the lime juice and 2 teaspoons salt, then use the back of a spoon to work the two together into a smooth, thickish marinade.

If you have banana leaves, cut 2 2-foot sections and use them to line a slow-cooker—lay one down the length, the other across the width.  Lay in the meat and pour the marinade over and around the roast.  Scatter the white onion over the meat.

Pour ½ cup water around the meat, fold up the banana leaves to roughly cover everything, then turn on the slow-cooker.  Slow-cook for on high 6 hours until the meat is fall-off-the-bone tender (the dish can hold on a slow-cooker’s “keep warm” function for 4 more hours or so).

While the meat is cooking, combine the red onion with the remaining ¼ cup of the lime juice in a small bowl.  Sprinkle with about ½ teaspoon salt, toss and set aside to marinate, stirring from time to time.

Use tongs to transfer the meat and onions to dinner plates. Spoon off any rendered fat that’s floating over the juices.  If there is a lot of brothy sauce—two cups or more—tip or ladle it into a saucepan and boil it down to about one cup.  Taste the sauce and season with salt if you think it needs it, then spoon it over the meat.  Top with the lime-marinated red onions and serve with salsa or hot sauce—and plenty of hot tortillas for making tacos.

No Slow Cooker? In a large (6- to 8-quart, at least 12-inch diameter) heavy pot (preferably a Dutch oven), assemble the dish as described—including dribbling the water around the meat.  Set the lid in place and braise in a 300-degree oven for about 2 ½ to  3 hours, until the pork is thoroughly tender.  Complete the dish as described.  If there isn’t much juice in the bottom of the pan, remove the meat and add about a cup of water.  Bring to a boil, scraping up any sticky bits, season with salt, then pour over the meat.

A Few Riffs on Cochinita Pibil: The most common variation on cochinita pibil in Mexico is with chicken.  You can simply replace the pork, pound for pound with chicken thighs; pulling off the skin before cooking will mean less fat to spoon off at the end (the broth won’t be quite as rich, however).  The chicken breast version is a little more involved:  Marinate bone-in, skin-on chicken breasts in the achiote.  Brown them in oil in a large skillet over medium-high; remove them to a baking pan lined with the optional banana leaves. Add the optional onion to the skillet and cook quickly until brown but crunchy; strew over the breasts.  If using the chile, roast, peel, seed and slice them; strew over the onions.  Cover with a more banana leaves if you have them.  Cover with foil and bake at 325 degrees until just cooked through, usually 20 to 30 minutes, depending on the size of the chicken breasts. Though I love cochinita pibil with black beans, you can easily scatter some quartered small potatoes or cubed sweet potatoes around the meat, to soak in all the delicious flavors.