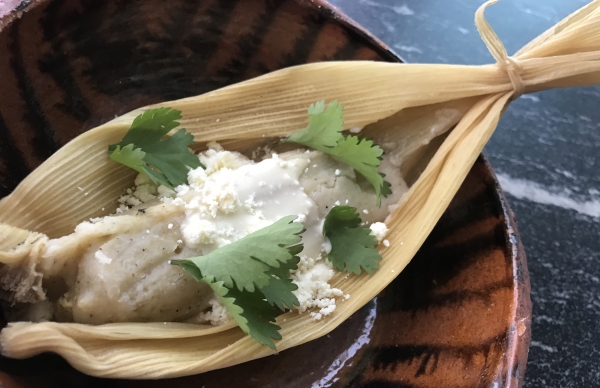 Preparing the cornhusks. Cover the husks with very hot water, weight with a plate to keep them submerged, and let stand for a couple of hours until the husks are pliable.

For forming the tamales, separate out 24 of the largest and most pliable husks—ones that are at least 6 inches across on the wider end and 6 or 7 inches long. If you can’t find enough good ones, overlap some of the large ones to give wide, sturdy surfaces to spread the batter on. Pat the chosen husks dry with a towel.

Preparing the filling. On a baking sheet, roast the tomatillos about 4 inches below a very hot broiler until soft (they’ll blacken in spots), about 5 minutes; flip them over and roast the other side. Cool and transfer to a food processor or blender, along with all the delicious juice that has run onto the baking sheet.  Add the chiles and garlic and process to a smooth puree.

Heat the oil in a medium-size saucepan over medium high.  When quite hot, add the puree all at once and stir until noticeably thicker and darker, about 5 minutes.  Add 2 cups of the broth and simmer over medium heat until thick enough to coat a spoon quite heavily, about 10 minutes.  Taste and season highly with salt, usually about 2 teaspoons. Stir in the chicken and cilantro; cool completely.

Preparing the batter. With an electric mixer on medium-high speed, beat the lard or shortening with 2 teaspoons salt and the baking powder until light in texture, about 1 minute. Continue beating as you add the masa (fresh or reconstituted) in three additions. Reduce the speed to medium-low and add 1 cup of the remaining broth. Continue beating for another minute or so, until a ½-teaspoon dollop of the batter floats in a cup of cold water (if it floats you can be sure the tamales will be tender and light).

Beat in enough of the remaining ½ cup of broth to give the mixture the consistency of soft (not runny) cake batter; it should hold its shape in a spoon. Taste the batter and season with additional salt if you think it needs some.

For the lightest textured tamales, refrigerate the batter for an hour or so, then rebeat, adding a little more broth or water to bring the mixture to the soft consistency it had before.

Setting up the steamer. Steaming 24 husk-wrapped tamales can be done in batches in a collapsible vegetable steamer set into a large, deep saucepan. To steam them all at once, you need something like the kettle-size tamal steamers used in Mexico or Asian stack steamers, or you can improvise by setting a wire rack on 4 coffee or custard cups in a large kettle.

It is best to line the rack or upper part of the steamer with leftover cornhusks to protect the tamales from direct contact with the steam and to add more flavor. Make sure to leave tiny spaces between the husks so condensing steam can drain off.

Forming the tamales. Cut twenty-four 8- to 10-inch pieces of string or thin strips of cornhusks. One at a time, form the tamales: Lay out one of your chosen cornhusks with the tapering end toward you. Spread about ¼ cup of the batter into about a 4-inch square, leaving at least a 1 ½-inch border on the side toward you and a ¾-inch border along the other sides (with large husks, the borders will be much bigger). Spoon about 1 ½ tablespoons of the filling down the center of the batter. Pick up the two long sides of the cornhusk and bring them together (this will cause the batter to surround the filling). If the uncovered borders of the two long sides you’re holding are narrow, tuck one side under the other; if wide, roll both sides in the same direction around the tamal. (If the husk is small, you may feel more comfortable wrapping the tamal in a second husk.) Finally, fold up the empty 1 ½-inch section of the husk (to form a tightly closed “bottom” leaving the top open), and secure it in place by loosely tying one of the strings or strips of husk around the tamal. As they’re made, stand the tamales on their folded bottoms in the prepared steamer. Don’t tie the tamales too tightly or pack them too closely in the steamer. They need room to expand.

Steaming and serving the tamales. When all the tamales are in the steamer, cover them with a layer of leftover cornhusks; if your husk-wrapped tamales don’t take up the entire steamer, fill in the open spaces with loosely wadded aluminum foil (to keep the tamales from falling over). Set the lid in place and steam over a constant medium heat for about 1 ¼ hours. Watch carefully that all the water doesn’t boil away and, to keep the steam steady, pour boiling water into the pot when more is necessary.

Tamales are done when the husk peels away from the masa easily. Let tamales stand in the steamer off the heat for a few minutes to firm up. For the best textured tamales, let them cool completely, then re-steam about 15 minutes to heat through.

Working Ahead:  Both filling and batter can be made several days ahead, as can the finished tamales; refrigerate, well covered.  Re-steam (or even microwave) tamales before serving.  For even more flexibility, batter, filling or finished tamales can be frozen.  Defrost finished tamales in the refrigerator overnight before re-steaming.