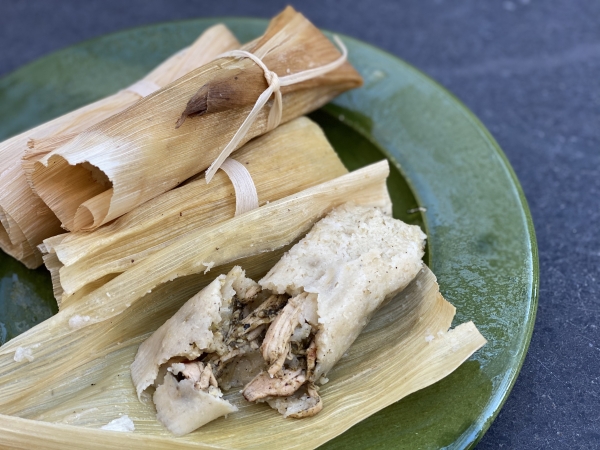 As you might predict, the very best tamales are made from fresh-ground corn masa and fresh-rendered pork lard. But if one or both of those ingredients isn’t available to you, don’t fret: you can make delicious tamales with alternatives. And you should. Because the iconic aroma of steaming tamales is something everyone should experience, triggering, as it does, a Pavlovian-like watering of the mouth, a response that doesn’t stop until a finished tamal is pulled from the steamy steamer and devoured.
Servings: 12tamales, but this recipe can easily be doubled or tripled
Print

Every region—honesty, every state, every community—of Mexico has its style of tamales. They can be wrapped in lots of different leaves, though cornhusks and banana leaves predominate. The masa can be seasoned with salt alone or with spices, herbs and sauce. And the texture can very from rather dense and pudding like or light and fluffy. For a dish that’s so simply described as corn masa around a filling and steamed in a leaf, there is more variety in Mexican tamales than in any other dish.

Masa: Though not everyone will have access to fresh-ground masa, most everyone can get masa flour (masa harina). There are two varieties sold in most Mexican groceries and on line: a fine-ground one for making tortillas and a coarser one for tamales. The second is the one you want; the first works in a pinch, but will produce much denser tortillas. If you see prepared masa for tamales (masa preparada para tamales) in the refrigerated case of your Mexican grocery, I recommend passing it by. Almost all are made with vegetable shortening and preservatives and, to me, have an off taste.

Lard: I recognize that there are people who can’t imagine bringing pork lard into their kitchens. For some it is for religious reasons and I certainly respect that. But for most people, it’s simply that they were taught it is bad for you or low-class or “not something our people would eat.” Well, it’s no worse for you than butter (actually, from a nutritional perspective, it’s not as bad as butter) and from a sociological point of view, we need to put those kinds of biases behind us. All food is good if we open our minds to it and the culture that created it. We simply have to recognize our prejudices and give ourselves time to get accustomed.

Look for good lard at a Mexican grocery store (often at the butchers’ counter) or a butcher shop (which often will have render duck fat—which works here in a pinch—before they have rendered pork fat). I don’t recommend the national brands of lard (Armor is a common one) because most are pretty tasteless as well as hydrogenated.

Steamer: Corn husk-wrapped tamales have to stand up as they steam, which means you need a steamer that is tall enough to accommodate them—about 6 inches of clear space between the steamer “shelf” and the top. The Mexican tamal steamers available at Mexican groceries and on line leave about a foot of clearance, but you don’t have to have one of those to make tamales. A collapsible steamer basket will work if you have a deep pot to fit it snuggly in; an 8-inch diameter pot that’s at least 8 inches high will work perfectly for this recipe. (Unfortunately, Chinese bamboo steamers are too shallow.) There are deep steamer baskets available for Instant Pots that are actually perfect for up to a couple dozen tamales.

Pro Tip: some of our restaurant cooks like to refrigerate the batter overnight, then rebeat it the following day, adding a little more broth to create the moistest tamales

Soak the corn husks.  Lay the husks in a bowl, cover with hot tap water, weight with a plate (to keep the husks submerged), and soak for a couple of hours, until pliable.

Make the filling. On a rimmed baking sheet, roast the tomatillos, unpeeled garlic and chiles about 4 inches below a hot broiler until soft and blackened in spots, about 6 minutes.  Flip them over and roast the other side.  If the garlic or chiles are soft and blackened quicker than the tomatillos, remove them. Cool for a few minutes, then slip the skin off the garlic.  Combine everything (including any juices) in a blender or food processor and run the machine until everything is reduced to a coarse puree.  Scrape the salsa into a medium bowl and stir in the cilantro and chicken.  Taste and season with salt, usually a generous teaspoon.

Make the masa. With an electric mixer (fitted with the paddle attachment if there is one), beat the lard or shortening, salt and baking powder for a couple of minutes until fluffy looking.  In 3 additions, beat in the masa.  Continue beating on low speed as you add 1 cup of broth in a slow stream.  At this point, the mixture should look like thick cake batter; if it is more the consistency of a paste, add additional broth to give it that thick cake batter-like texture.  Beat for a couple of minutes more, until a ½ teaspoon dollop of the batter floats in a cup of ice-cold water.

Set up the steamer.  Drain the corn husk and select 12 of the largest, nicest-looking ones to use for forming the tamales.  Fill the bottom of your steamer with at least an inch of water.  Since you have to steam tamales for an hour or more, it’s customary to drop in a coin to jangle around, letting you know that the pot hasn’t run dry.  Set in your steamer basket or shelf and use some of the corn husk leftovers to line the bottom.

Form the tamales.  Dry off your 12 good corn husks, then 1 at a time, form the tamales:  with the flat side toward you, smear ¼ cup of the masa in a 4-inch square right in the middle, close to the flat-side “front” edge—I smear the batter to within about ½ inch of that “front” side.  Scoop a portion of the filling right down the center, then pick up the two sides so that the batter encases the filling. Holding the two sides together, gently fold them around the tamal, then pinch your tube of corn husk at the point where the batter/filling ends (where the pointy, unfilled cornhusk begins) and fold the empty part under.  It takes a lot of words to describe something that is really very simple.  You’ll get the hang of it right away. Stand the tamal on its folded end in the steamer, turned up, unfilled part of the husk toward the edge to keep it in place. Continue until all tamales are made and stood in the steamer.  If there is unfilled space in the steamer, lightly wad up a piece of foil to fill the space and keep the tamales from sliding down as they steam.

Steam the tamales. Cover the steamer and set over high heat.  When steam comes puffing out from under the lid, reduce the heat to keep the water at a steady, gently rolling boil.  Steam the tamales for an hour, then use a pair of tongs to gently remove one and test for doneness.  If the corn husk pulls away cleanly, they are done.  If it’s still sticking, return the tamal to the steamer and give them another 10 minutes or so, until husk and wrapper separate easily.  Turn off the pot, let them stand for 10 to 15 minutes for the masa to firm up and you’re ready to serve these aromatic beauties.