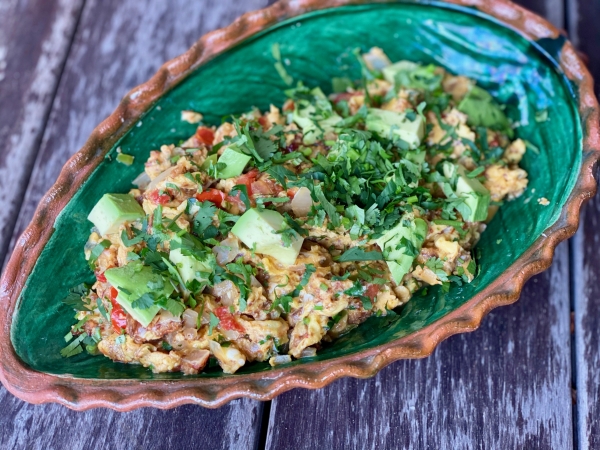 Many Mexican grocery stores sell carne seca, large pieces of dried beef (what we’d call jerky). Sometimes the meat will have been run through a Jaccard machine to tenderize it, but it’s not as nearly as tender as the jerky that’s typically sold as snacks for a U.S. audience. The Mexican stuff is intended to be pounded or milled into a fluffy-looking ingredient that’s called machaca, from the Spanish verb machacar, to pound or mash. In the arid north of Mexico, where dried beef is commonly on the menu, many cooks are used to wrestling planks of carne seca into user-friend machaca. North of the border, we are not, so I encourage you to buy the already-pounded/milled stuff from a Mexican grocery or on line.
Print

In a large (10-inch) skillet, preferably non-stick or seasoned cast iron, heat the lard or oil over medium.  Sprinkle the machaca evenly over the fat and stir nearly constantly as the mixture moves from a little foamy looking to toasty and aromatic, about 2 minutes.  Add the onion, green chile and tomato to the pan and stir frequently until the onion has softened and any juices from the tomato have evaporated, about 8 minutes.  Season the eggs with salt (less than you’d normally use because of the saltiness of the machaca, for me about ½ teaspoon), then add them to the pan along with half of the cilantro.  Stir slowly until the eggs are as scrambled as you’d like, then scoop into a serving dish and sprinkle with the remaining cilantro.  Diced avocado is never out-of-place on machacado, but it’s not required.