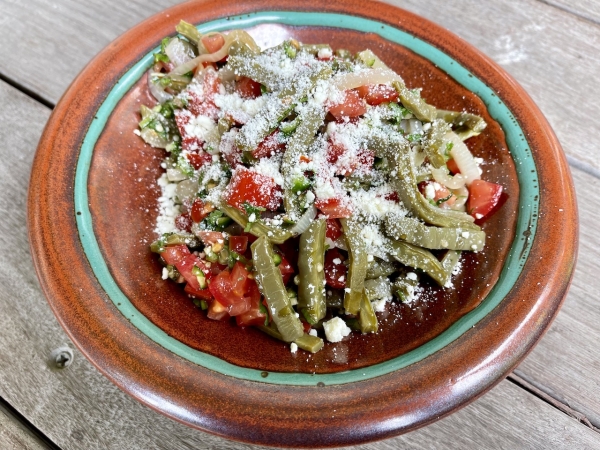 First, if you haven’t tasted nopal cactus, it’s pretty easy going as far as exotic ingredients are concerned—a little crunchy like an al dente green bean but decidedly tangier. It’s the texture that has to be wrestled with. Cacti are succulents, which means they store moisture in a way that won’t easily evaporate. Specifically, nopal cactus (aka prickly pear cactus) stores it in a mucilaginous substance that begins to leak out as soon as the cactus paddles are cut, accelerating as they are exposed to heat. If you’ve ever cooked okra any way but deep-frying, you’ve experienced this sticky (dare I say slimy) stuff. But you can eliminate it in several ways. The most common approach in Mexico is to boil the cut up cactus in lots of water, usually with a piece of onion and a couple cloves of garlic, leaching out all that stickiness into the water. (There are quite a few cooks who advocate adding a handful of tomatillo husks to the water to help cut the mucilage, but I haven’t found it to be too effective. I’ve also heard people advocate that a little oil in the water will do the same thing.) Once tender, the nopales are rinsed until all the gunkiness is gone. I rarely cook nopales that way because I find boiled nopales bland and, besides, they usually continue leaching baba (as the sticky stuff is called in Spanish) as they sit. Instead, I either put them in a pan without water and cook them until all the leached out baba evaporates, or I grill the paddles whole, then cool them and cut them. With both these approaches, the sticky stuff is virtually nonexistent. Now, about calling this a cactus salad: I doubt most of you would recognize its saladness. It’s more like pico de gallo salsa with cactus added. But then, in Mexico, any vegetable-y something on the side of a plate is considered an ensaladita. One final comment: I’ve watched skillful cooks in Mexico boil nopales in unlined copper pots (like the ones used for cooking carnitas) or with copper coins in the water to preserve their bright green color. (Nopales, like tomatillos, customarily fade from limey-colored to olive as they cook.) As much as I’ve tried to replicate what I’ve watched them do, I haven’t been successful.
Servings: 31/2 cups, serving 8 or more as a condiment or add-on to a grilled or roasted dish
Print

Clean and cut the nopales. One by one, clean the cactus paddles:  Holding a paddle with a pair of tongs, trim off the edge that outlines the paddle, including the blunt end where the paddle was severed from the plant, then slice or scrape off the spiny nodes from both sides.

Cook the nopales in their own juice. Cut the paddles into ½-inch squares or into ¼-inch strips (if any are longer than about 2 ½ inches, cut them in half).  Scoop the cactus into a medium (2- to 3-quart) saucepan and add 1 tablespoon oil, ½ teaspoon salt and the sliced onion.  Cover and set over medium heat and cook, stirring once or twice for about 5 minutes.  Uncover the pan and continue to cook, stirring regularly until all of the liquid has evaporated and the mixture is just beginning to sizzle in the oil, about 5 minutes more.  Spread onto a large plate to cool.

Finish the cactus salad.  In a medium bowl, combine the cooled nopales with the onion, tomato, green chile and cilantro.  Season with lime juice and salt (usually about 1 teaspoon) and a little more olive oil.  Sprinkle with the fresh cheese and you’re ready to serve.

Buying cactus paddles:  Small (about 6 inches in length) cactus paddles will be the most tender.  Large ones, because they be much thicker, tend to be fibrous.  In Mexican groceries, it’s common to find them cleaned and, often, cut up for you.  If choosing cut-up nopales, make sure the pieces aren’t too thick, indicating they were from large paddles.

Grilled cactus salad: This is a take-off from the street vendors who grill nopales to serve with grilled meats. Brush both sides of the paddles with oil and sprinkle with salt.  Grill over a medium-hot fire (gas, charcoal or wood) until blotchy-brown underneath, about 4 minutes, then flip and grill the other side.  The paddles should be completely limp—indicating that they are cooked all the way through.  Cool in a single layer, preferably on a cooling rack, before cutting into strips or squares.

For the professional:  Spread out the nopales to cool quickly and completely before refrigerating. They will keep for several days.  Mix the salad shortly before serving.