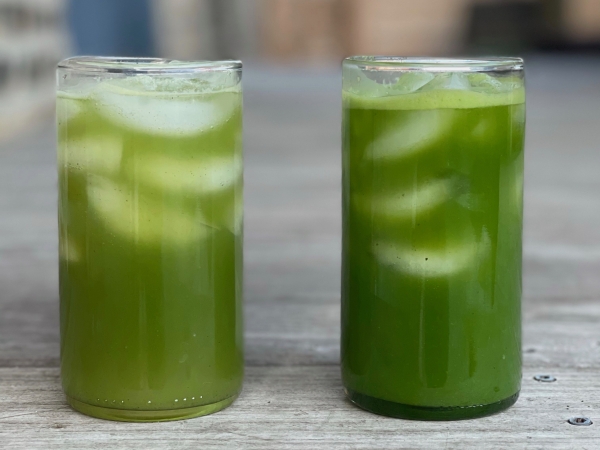 When people think of fruit aguas frescas in Mexico, I doubt they’re thinking cucumber. Guava or guanabana, watermelon or cantaloupe—those are flavors that are more likely to elicit oohs and aahs. But, for me, the most refreshing is one made from cucumber laced with lime and mint. And once you’ve arrived at that delicious glass of refreshment, you’re a stone’s throw from the jugo verde—the green juice—that many visitors find on the breakfast buffets throughout Mexico. Or that they find in the brightly lit little juice bars that dot most Mexican neighborhoods. It’s essentially cucumber agua fresca sweetened with pineapple instead of sugar and made thick and rich—and very green—with the addition of green leaves and, if you’re so inclined, with some nopal cactus. To my taste, both of these preparations are best served cold, the first over ice, the second chilled. If—as I do—you prefer serving jugo verde right after blending, refrigerate the ingredients and you’ll be good to go. If you choose not to peel the cucumber, the agua fresca will shimmer with a color closer to the skin of a ripening lime. Otherwise, it will be margarita colored. If you’re using nopal cactus (which gives an incredible texture) and it’s not cleaned, hold it with a pair of tongs and cut off the outside edge of the paddle. Then, holding your knife perpendicular to the paddle, scrape away all the nodes from both sides.
Servings: 4cups of cucumber agua fresca, 8 cups if you continue onto jugo verde
Print

For the agua fresca.  In a blender jar, combine the cucumber, lime, mint or cilantro and 4 cups cold water.  Blend until smooth, then taste and season with sugar—1/4 cup will leave it with a gentle sweetness, though you may want more.  Strain before serving chilled or over ice.

For the jugo verde. In a blender jar, combine the cucumber, lime, mint or cilantro, pineapple, spinach (or parsley), nopal cactus (if using) and 4 cups cold water.  Blend until smooth.  Strain before serving chilled or over ice.