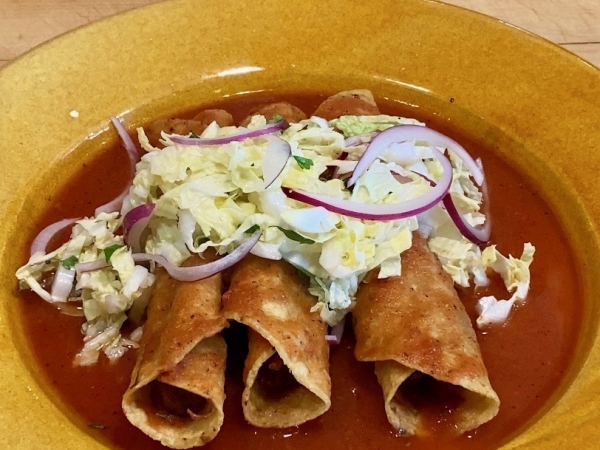 Make the sauce. Scoop the garlic and chiles into a small microwaveable dish, cover with water and microwave at 100% power for 1 minute.  Drain and transfer to a blender or food processor, along with the tomatoes and their juice.  Blend to a smooth puree, then pour into a small saucepan and stir in the broth.  bring to a boil over medium heat. Taste and season with salt, usually a scant teaspoon.  Cover and keep warm over low heat.

Make the garnish.  In a medium bowl, mix together the cabbage, red onion and vinegar. Taste and season with salt, usually about 1/2 teaspoon.  Set aside the chopped cilantro to add just before serving and to add to the taquito filling.

Roll the taquitos.  In a bowl, mix together the meat and half of the cilantro.  Taste and season with salt if needed.  Liberally brush or spray both sides of the tortillas with oil, slide into a plastic bag (don’t seal) and microwave for 1 minute.  Slide the hot tortillas out of the bag and, when just cool enough to handle, one by one fill and roll the tortillas: with the tortillas still in a stack, scoop about ¼ cup filling down the center and roll it up tightly.  Lay it on a tray or plate, seam-side down, and continue with all the rest. I find it easiest to fry these if they’re skewered: Rolling the taquitos on their side, skewer 6 of them, flap to flap, on a bamboo skewer. Break off the skewer so that it doesn’t protrude more than ½ inch beyond the taquitos.

Fry the taquitos. In a large skillet, heat the oil over medium-high.  When it is shimmering, test a corner of a taquito in it:  If the taquito sizzles strongly, the oil is hot enough.  Lay the taquitos in the oil (flap-side down if you didn’t skewer them) and fry until crisp and golden underneath, usually about 2 minutes, then carefully flip them over and fry the other side.  Drain on paper towels.