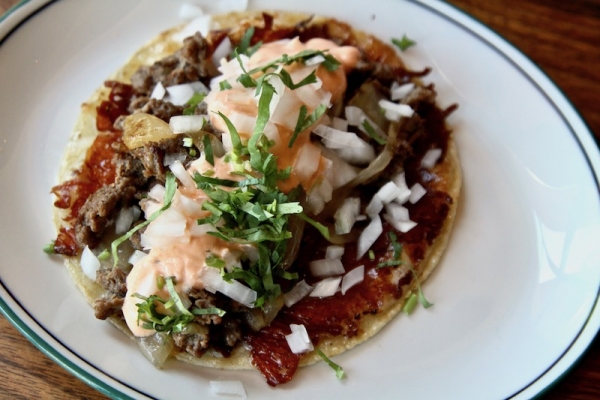 In a mixing bowl, combine the Greek yogurt and Mexican hot sauce. In another bowl, mix the lamb with the spices.

Heat the oil in a large (12-inch) non-stick skillet over medium heat, add sliced onions and cook until golden brown and soft, about 7 minutes.  With a slotted spoon, remove the onions from the skillet, leaving behind as much oil as possible. Add the ground lamb to the skillet, using a spatula to break up the meat and spread it over the entire surface of the skillet to ensure even browning.  Cook, stirring occasionally, until meat is browned, 4 to 5 minutes. Scoop the onions back into the skillet and stir to combine. Taste and season with salt, usually about a teaspoon.

In another large (12-inch) non-stick skillet (or the same skillet washed and dried) over medium heat, spread ¼ cup of the cheese in a 4-inch round.   When the cheese has melted, about 15 to 20 seconds, place a tortilla on top. When you see the cheese has browned and is crisp underneath, use a spatula to scoop up the cheese and tortilla from the skillet and flip it over onto a plate so that the cheese is now on the top.  (As you get more comfortable you can make 2 or 3 tacos at a time.) Top the cheese with a portion of the lamb mixture, yogurt sauce, chopped onions and cilantro. Serve immediately.