Chef Rick Bayless is headed to the kitchen in Wicker Park making some amazingly tacos for the “Fonda Fridays” series.

“Occasionally, it’s nice to get out of downtown and just have fun in the kitchen.  I can promise some different, delicious and downright joyful tacos. These tacos will be unlike any thing else I’ve done,” Bayless said.

Fonda Fridays will also mark the first time beer from Cruz Blanca Cervecería, Bayless’ brewery in the West Loop, will be served in any of his restaurants outside the Randolph Street locations. First up? CDMX, brewer Jacob Sembrano’s  bright pilsner with a delicate fruity German hop aroma balanced by a smooth, clean and soft bitter finish.

Good food, plus guests can also use the dinner series as an excuse to get a jump on holiday shopping – Rick will be signing cookbooks when he jumps off the line.

The launch of the Fonda Fridays series coincides with other changes at the restaurant, including a move toward Friday brunch, the debut of a new catering service and the introduction of a fall menu, which includes seasonal stars like Roasted Butternut-Bacon Tlayuda and a Spiced Tres Leches Cake with Red Chile-Apple Salsa. 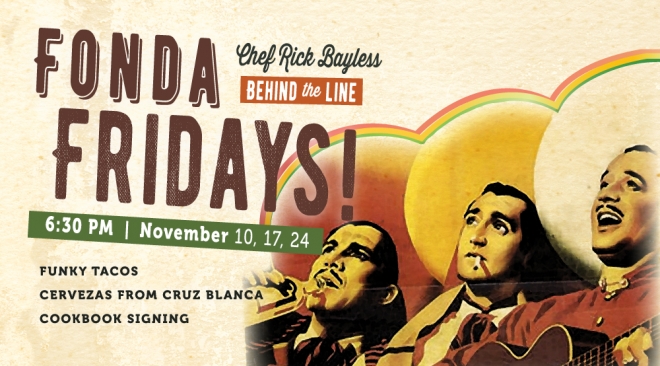