Josefina Velázquez de León is an incredibly important name in the history of Mexican food. Sadly, most people don’t know who she is.

This month, Frontera Grill is proud to bring you a seasonal menu inspired by this influential author’s many contributions to Mexico’s rich culinary heritage. Our chefs have pored over our collection of her cookbooks — we have about 50 in Frontera’s research library — to make a menu showcasing the regional flavors of Mexico.

“The research for this menu was rather daunting. There are just so many books and recipes, but the one we really focused on was  “Viajando por Las Cocinas de la Republica Mexican” (Traveling in the Kitchens of the Mexican Republic), so the recipes are all over the Mexican map” said Richard James, Frontera’s Chef de Cuisine. 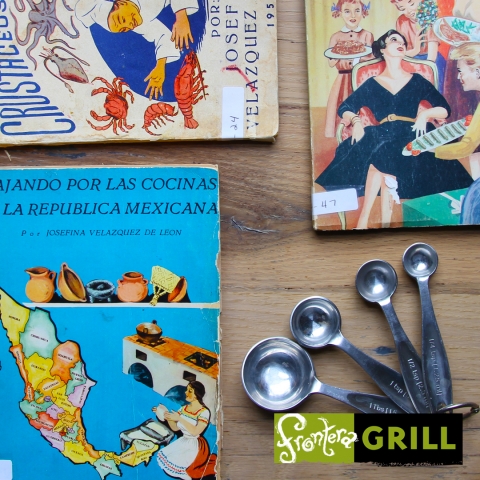 Rather than making faithful recreations of Josefina’s dishes, Chef Richard and his Frontera kitchen crew translated the decades-old recipes for today’s guests.

“All of her ideas and the concepts are there, but I had to cook for diners in 2016 make the food interesting. It was really fascinating and challenging to me,” he said.

So who was Josefina?

A childless widow with no professional training in the kitchen, Josefina started writing cooking columns for magazines, which led to her opening the Academia de Cocina Velázquez de León, which was sort of like this traveling road show across Mexico where housewives learned to cook.

That’s a crucial detail, because until the mid-1900s, Mexican cuisine was a hodgepodge of regional recipes that didn’t relate to each other very much. As reported in this profile in The Braiser:

The result of these classes was profound: She’s gave a national face to regional Mexican cuisine, carrying a banner that said, ‘We’re all Mexican: Veracruz Mexican, Oaxacan Mexican, Yucatecan Mexican.'”

Later, Josefina  start her own publishing company, which printed a staggering 140-some of her cookbooks, which were distributed throughout Mexico. She also started a mail-order catalogue of cooking products, a monthly magazine, radio program and a television show —  particularly astounding, considering her TV program was aired roughly the third year television even arrived in Mexico.

Her career was prolific, and we invite you to join us as we cook (and eat!) in tribute to this unheralded giant of Mexican cuisine.